Wow, when I was first asked to do this video with old friend Emilie Stark-Menneg I was taken by surprise.  When we first met over ten years ago, she and I had discussed collaborating on a dance / music piece which never took form, I think because our friendship blossomed and we simply enjoyed each other’s company so much we forgot about the collaboration!  She’s a bright spirit in my life, and we will always be friends, I believe. 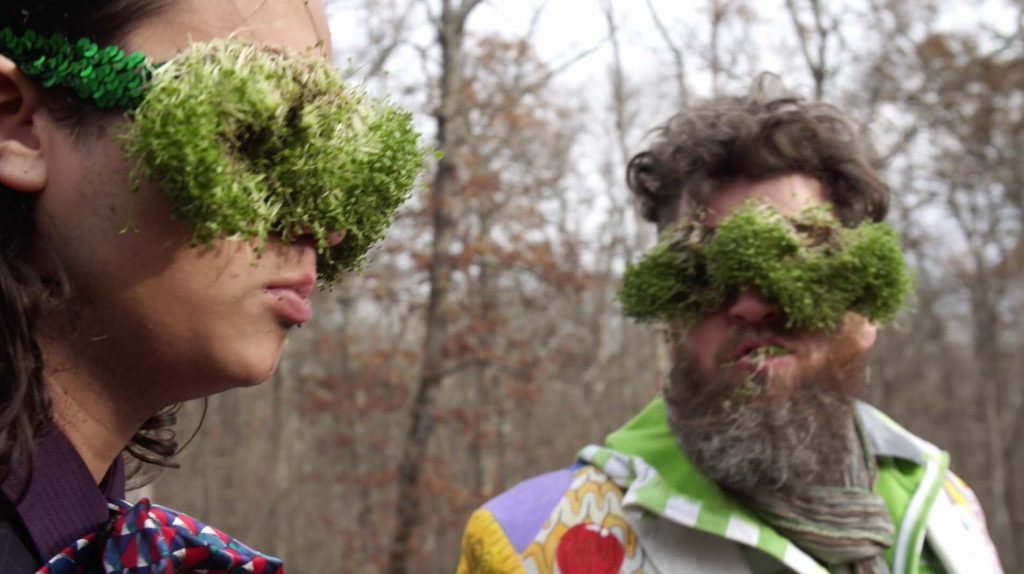 Anyway, they booked me a flight out to Boston the day after I finished my Loop Painting series and had the art show / album release.  It was a wild couple of days, kind of a blur since things were happening so fast.  I arrived late in the evening by cab to a house in Boston, not sure if I was in the right spot or not, but soon Emilie came out to greet me and we were on our way up many flights of stairs to a room filled with men and dogs.  Emilie’s partner, John Bisbee, has a very commanding and comedic personality, says things that cross the line quite often.  Made me laugh repeatedly and inspired me to be myself!  He and Emilie co-directed the video which took place the following morning.
We awoke early and gathered our things, got in a couple cars with a couple more people and were on our way to a farm somewhere close to RISD (Rhode Island School of Design).  A couple of the art professors from the school had offered their little goat farm for this strange expedition.  Immediately, the assistants started digging holes and John and Emilie started discussing the shoot.  I was left to my own devices and started working on my guitar playing because it wasn’t quite clear if they would be using the recording of Holy Mother or recording me doing it live during the video.  I’m glad they used the recording.  We all did our own makeup and costumes etc.
Once the shoot started they went through a shot list like a machine gun.  John shouting directions to all the folks involved.  They were capturing a moment, putting it all on just one or two takes of each scene, creating something wonderful because it was live, not well rehearsed or glossed over with effects.  They captured the present moment.
The hole they dug was for Emilie to lay in.  They had grown clover sprouts in all different shapes.  One large piece was to cover Emilie’s body as she lay in the half frozen ground, nearly naked.  The rest of the clovers were made into masks that sat in water, which we all wore in a later scene then ate off of each other’s faces!  At one point John, who was the “director” of a commercial for this food you grow on your body actually snorted a couple lines of these clovers all chopped up finely.  I think it hurt, but art!
From: Uncategorized