Oh, my glory, this song is one of my life’s favorites. As soon as I wrote it, I knew we would be together for a long time… I wrote Rainy Morning as one of the very first songs of the #100songs project. It was on a beautiful early Autumn day after dropping my daughter off at school and walking home in a light misting rain. It was just a perfect and lovely morning. I walked in and picked up the pen and paper, wrote the words and went up to bed for a nap. After the nap I wrote the music to the lyrics. I didn’t think it was going to be good, and actually it didn’t even seem like a very good song as I was writing it, but when I reviewed it a day or two later I couldn’t stop playing it. It has been that way since.

I feel extremely lucky to have great musicians who surround me in my life. On this track I was blessed with the drumming of Dominic Marini (who I actually met at a show I was playing because he loved the song), the banjo playing of Shaun Jones (a member of Heck Yup and 23 Psaegz), and Michaele Lynne Jacot (a friend of 23 Psaegz tuba player Brett Gobe, and now a friend of mine as well!). The rest of the instruments and voices are mine, ha! Thank you all for subscribing. You’re helping me make dreams come true!

Great pleasure! This song took a ton of hours to complete. It’s the first of the 23 Psaegz songs that I’ve done as part of this song of the week project. It was written during the #100songs series, so it counts. I wrote “House Show” the morning after a sweet show in September with Diane Cluck and some other awesome artists including Ken’s Last Ever Radio Extravaganza and Cammy Enaharo.

This song was written about my experiences in Berlin over the past 10 years. Many references to friends and places I’ve been. Compositionally, one of my most challenging projects.

This is one of the best songs I have ever written; likewise, it’s one of my favorite recordings to date including French Horn, Banjo and an array of beautiful sounds. 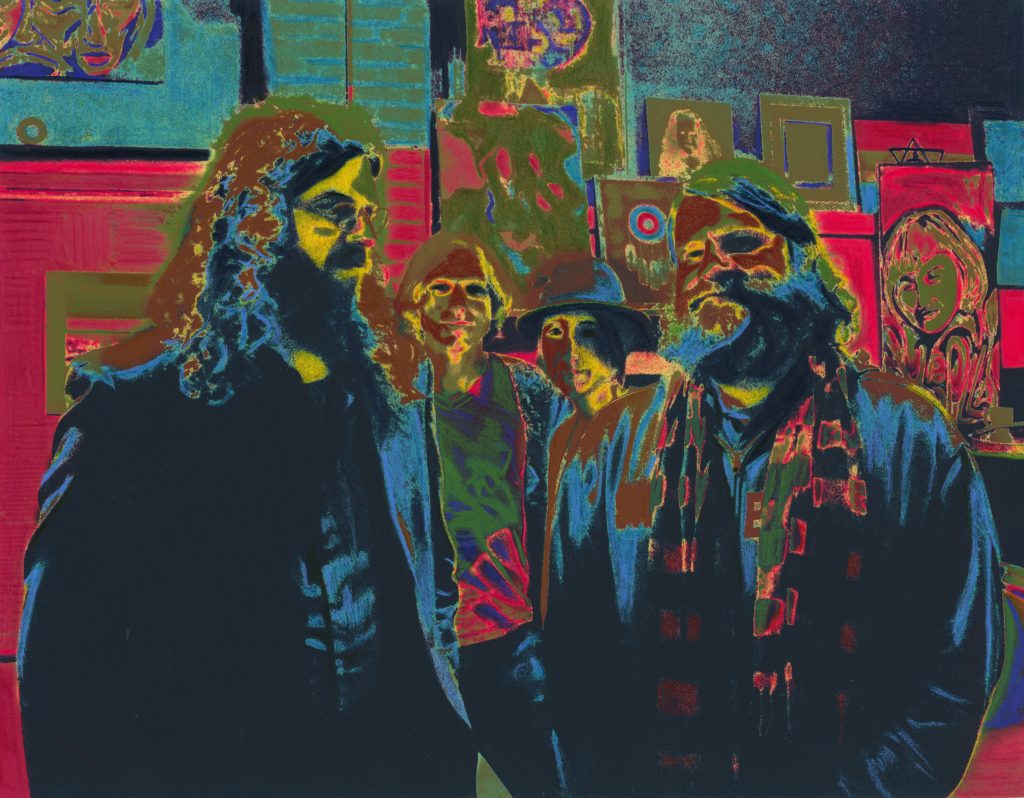 Good day to you all! This is an exciting week for me. This song, Berlin, is one of my best compositions and has a very interesting story. The story is available to all subscribers “downloader” and beyond via mp3 download or streaming. To upgrade your subscription level go HERE.

During the 4 months of almost daily writing I did last year to come up with the #100songs, I went through multiple songwriting techniques. This one was by far the most comprehensive and involved process. I got up early in the morning and started walking with a pad of paper in my hands. I was setting out to write a song about Berlin. I wrote down every memory I could think of in that town I love so dearly. Some of these memories involved friends, others involved touring events. One memory, in particular, stuck out to me; it was the show we played at the House of World Cultures aka Haus der Kulturen der Welt. At that show, we made a new friend who invited us to play another show at the end of our tour at a church in Berlin called “theaterkapelle” Toward the end of the show, police came and shut us down, but we did an amazing thing and got the audience to go up on the stage and perform the Dufus song “Fire”. So I took all these ideas from the page and started writing poetry from the concepts as I wandered. After I had a good solid set of words to write my song, I took my phone and recorded myself singing these words. From that song, I went home, pulled out my guitar and put some chords behind the words. It was a very drawn out writing process, but I think you’ll be able to feel it from the composition, it is not your run of the mill “song”. It flows and bounces and twists and turns unpredictably, but it still feels cohesive! It’s one of my favorites.

In the song I also mention Down By the River because of the amazing time I had playing there. Every time I’ve performed in Berlin I have gotten to see awesome places, squats, great graffiti, and I’ve met some of the most beautiful people of my life there. My favorite squat venue is Schokoladen. 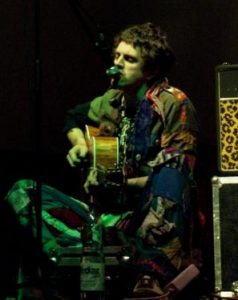 Bb7 F-E-D-C
Down By the River, where everyone lives on the top floor
F-E-D-C-E-D
Little tiny thrift stores
F-E-D-C-A F-E-C-A
Squats and graffiti making beauty 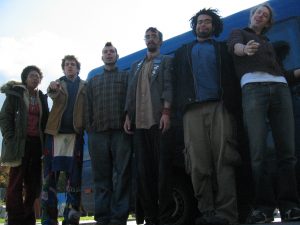 Dufus on tour in 2007 (the tour mentioned in the song) 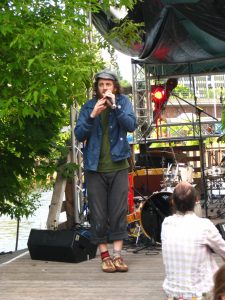 Photo from Down By the River Festival

This is a special “extra” for all the “downloaders”, “hangerouters” and various “boomer” subscription levels. Thank you! 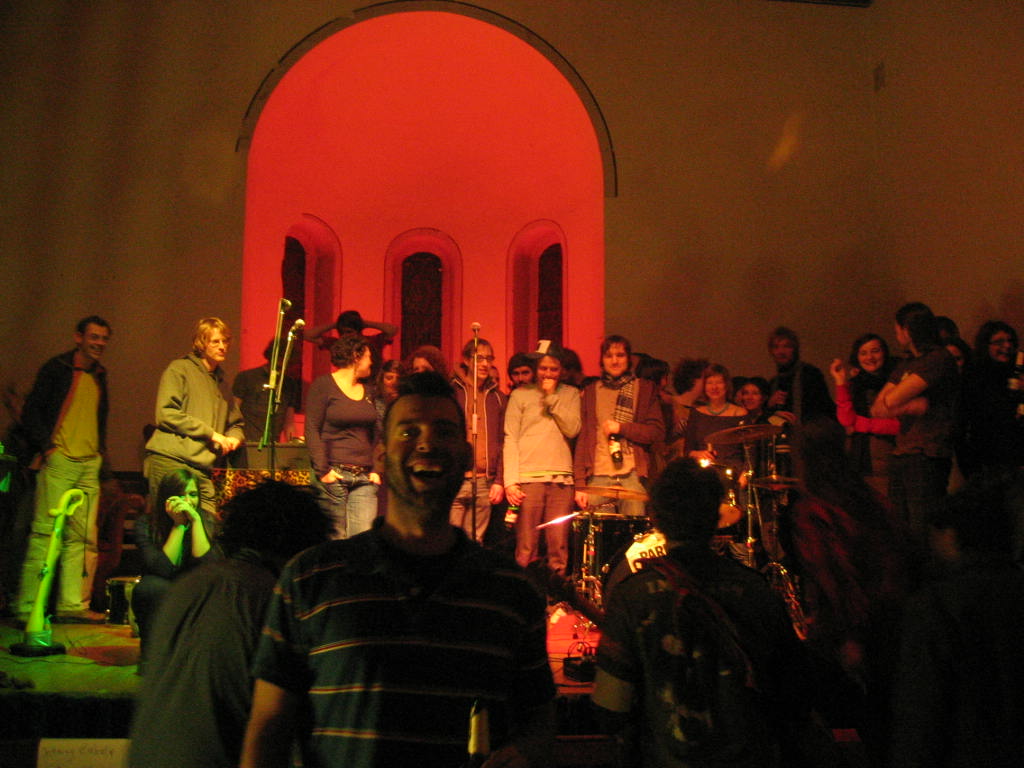 Hi Everyone!
Check out this video promoting this site and the subscription service Seth Faergolzia is doing now… Please use the video to spread the word!

Great pleasure!  This song took a ton of hours to complete.  It’s the first of the 23 Psaegz songs that I’ve done as part of this song of the week project.  It was written during the #100songs series, so it counts.  I wrote “House Show” the morning after a sweet show in September with Diane Cluck and some other awesome artists including Ken’s Last Ever Radio Extravaganza and Cammy Enaharo.  I’ve been running shows here at Whenland and also at Meddlesome Lab in Rochester for almost 7 years now.  It’s almost always an inspirational and joyous time, so I decided to dedicate a song to the concept so that perhaps other people might experience its joys.  Special thanks to all my bandmates from 23 Psaegz for their work on this one.

Soon after I wrote this song, I knew it would quickly become one of my long time favorites.  Something happens when I write a song that really resonates with me… It bounces and bounces around in my head for days, whenever I pick up my guitar to sing it’s that song which comes to my fingers and throat.  “Work to Believe” is a vote of encouragement to both myself and to the struggling people in this world, the ones who have hope and really try to do well by others but also for those of us who wish to achieve great things in this world.  It is quite different in this recorded version from it’s original acoustic incarnation.  On a technical side, it was a very challenging production for me because I’ve never recorded or mixed live drums before.  (I read something this morning that said something like “jump off a cliff and build your wings on the way down”.  Seemed suiting.)  Devon Tramell played the kit on this one.  In addition to Devon drumming, Rick Snell played mandolin, Shaun Jones played electric guitar and Laura Lee Jones did some vocals.  Thanks all!  Feel free to give it a listen and comment on what you think!

Taking myself back again

So hard.  It takes work to maintain who I am

In this world where humans consume everything

I overeat, I take the drugs, I live the same as anyone

I watch TV, I fantasize, I let my eyes glaze over and over

It takes work to hold onto the spirit inside

It takes work, just hold on and you will arrive

Turning back into myself

Turning back into myself again

I’m dreaming out loud from my heart

I’m dreaming out loud what my heart would want

I’m dreaming and making what my heart would want me to do.

It takes work to hold onto the spirit inside

It takes work, just hold on and you will arrive

I’m working to save my own life

I’m working to save my own life

I’m working to brighten the lives all around me

I’m working to waste not